Diving in Playa del Carmen one of the most popular marine species for our divers is the marine turtle. Phantom divers divers find turtles every day and the best thing is that the camera does not scare them. Sea turtles are reptiles, because they need to go out to breathe to the surface. They are animals that can live a large number of years, (an estimated 100). Among the sea turtles that we can find diving in the reefs of Playa del Carmen is the hawksbill turtle, green turtle and loggerhead turtle.

Turtle of Carey: they are of the smallest turtles, they are characterized by their mouth in froma of peak of falcon. They can reach up to 90 cm long.
Green turtle, have an oval shaped carapace, and can measure up to 1.20 m. His name “Green” is not due to the color of his shell, but to the green color of his flesh
Turtle Caguama: It is characterized by its large head and the heart shape of the shell. They can measure between 80 cm and -115 cm.

All sea turtles have similar nesting behaviors. The females return to lay their eggs near or on the beach where they were born. They come out of the water, climb the sand to dig a well where they deposit their eggs, which they then cover with sand and thus return to the sea.

Sea turtles are very threatened animals, both in their natural environment, the sea, and in the terrestrial environment. When going out to spawn, it is where they become more vulnerable since in fact, the percentage of offspring that survive is very low (it is estimated 1 or 2 out of every 1000). Currently, nest poaching and tourism development are making it increasingly difficult to find safe places to lay their eggs. 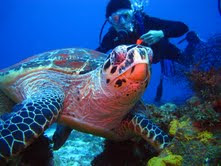 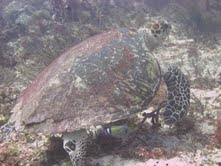