TIBURON TERRITORY: THE WORLD IS THAT

HomeBlogUncategorizedTIBURON TERRITORY: THE WORLD IS THAT
Posted 22 November, 2010

TIBURON TERRITORY: THE WORLD IS THAT

Member of the staff of Phantom Divers, Riviera Maya, Mexico. 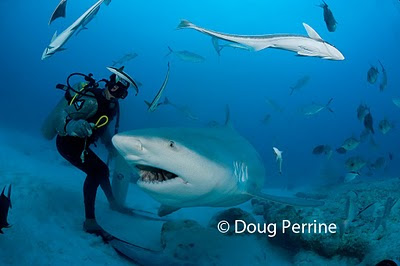 * This photo was taken from the 2009-2010 season by Doug Perrine. Doug is a professional photographer who has worked on many occasions with National Geographic.Lately there have been open ways to support the protection of sharks. Growing non-governmental associations, international organizations, groups of civilians, concerned about the rapid changes that the world presents today have raised their voices and have promoted: Creating a better future united with a common goal where we all participate with the better attitude solving a problem and creating agreements in societies.This history has begun many years ago with the sighting of the Tiburón Toro in the waters of the Mexican Caribbean, specifically in Playa del Carmen;One must speak of an initiator and visionary who saw a far-reaching future with a background that arose through a passion towards the sea and towards the species belonging to it.

Jorge “the Chinese” Loria, As a lover of the oceans and the species that inhabit it, implemented a new form of interaction with the Bull Sharks in Playa del Carmen.

The recent boom of this dive moved many interests and made the eyes focus in one direction only. Many shark lovers have come together this season to see them with their own eyes. The first Toros displayed this season were at the end of October, an integrated group of 4 to 8 bulls and with which they began to do the interaction that has been done in recent years. 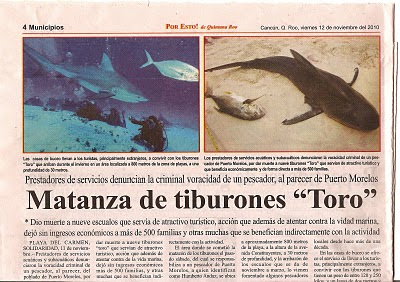 ** This photo shows the first article published on November 12, 2010 in the local newspaper “Por esto” to read more online go to: poresto.net

DAY OF MOURNING FOR THE LOVERS OF THE SHARKS

The news arises that a group of sharks were captured by local fishermen from Puerto Morelos. A total that has not been fully clarified and that has been altered by the media indicate that female sharks were pregnant. In this case, two important pieces of information are stated: from November to March of each year sharks arrive at the shores of Playa de Carmen to have their young on one side, and on the other we know that sharks to reach sexual maturity require a average between 10 to 15 years, which implies for future generations more than a decade of risk for the preservation of their species, taking into account the natural dangers of the oceans, scarce food and overexploitation of resources.

The most involved in this issue will know the vital importance of maintaining the existence of the shark in our seas.

At first sight a shark can be aggressive and dangerous, however experts who have had the opportunity to study them observe it as one of the predators with the highest level of intelligence and strength to hunt, that is why it is placed on top of the food chain and in which it is a key piece in evolution. 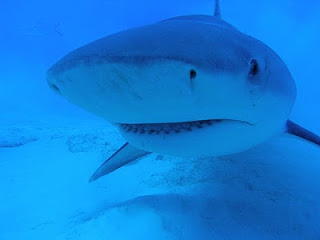 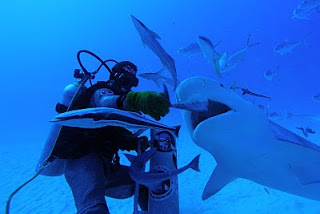 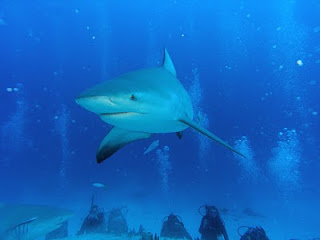 In these photos: 1. Tiburon Toro in Playa del Carmen, this photo was taken in the 2009-2010 season. 2. Jorge “el chino” Loria practicing diving with food. 3. Group of divers observing and interacting with the Toro sharks in Playa del Carmen.

Previous months a group created by Jorge Loria, Alberto Friscione, Rodrigo Friscione, Jose Maria Lopez, Russ Hennessey, Carlos Estrabeau among others raised the creation of an organization that is in favor of promoting the life and care of sharks.

This year we plan to place tracking devices to know the trajectories of this magnificent species, where do they go and where do they have their offspring?

These devices are satellite and the cost is very high, through this AC Civil Association is intended to gather resources for this research mainly governed to understand a creature that has been feared for his little knowledge for a long time ago.

The fear makes all confusing but true knowledge generates a conscience on a personal level and that surpasses others, because in this world we are not alone.

** To learn more about this Association go to: SAVING OUR SHARKS. 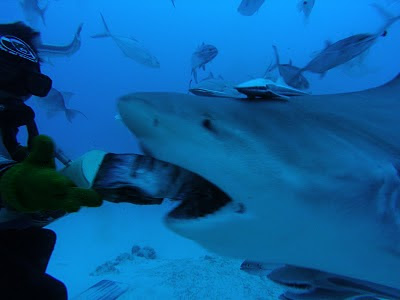 WHATS NEXT? What can be done? How do I INVOLVE?

You must act and work very hard, you must take measures of conscience on a personal level. The world is changing faster and faster, as well as populations, new ones emerge and bad consumption habits are maintained. What today will be to face oneself and begin to work on overcoming oneself, because in this way when you discover yourself as you start to give love to your neighbor and feel at ease with everything around you ; therefore the daily interpersonal dynamics become more effective.

Currently there are TWO petition letters where signatures will be collected, the first will go to CONANP, the Secretariat of Fisheries, led by our friends of “BLUE HEART SOCIETY” and the purpose is to show the economic losses considering that diving with the Shark became popular in such a short time thanks to the initiator.

PARTICIPATE WITH YOUR FIRM BY MAKING A CLICK HERE.

On the other hand there is talk of a meeting of all dive shops in the coming days where the collection of signatures will take place to present a bill before SAGARPA.

This letter is the most important because of the work behind that has been carried out to our days and everything that is involved.

Be part of this group: SIGNATURE OF PETITION ZONE OF NO CAPTURE FOR SAGARPA.

The union will be key so that the direction of this theme carries a single and very simple objective: The conservation of one of the most important marine species for evolution.

“Who does not evolve, simply stays where he is”

Let’s take care of this world that we have to live, remember that we are passing through and that the world as we leave it will enjoy it or not our children.

The post TIBURON TERRITORY: THE WORLD IS THAT appeared first on Phantom Divers.