MEETING WITH WHALE SHARK IN THE CARIBBEAN!

HomeBlogUncategorizedMEETING WITH WHALE SHARK IN THE CARIBBEAN!
Posted 23 July, 2010

MEETING WITH WHALE SHARK IN THE CARIBBEAN! 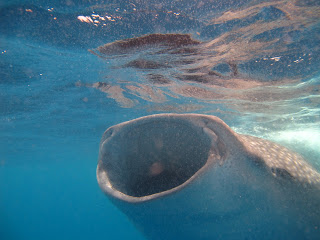 The largest of all sharks and the largest fish that exists, the whale shark is one of the most dramatic views of the oceans.

Its large size, distinctive patterns and huge frontal mouth make it immediately recognizable and can be seen commonly roaming near the surface in tropical and subtropical waters around the Mexican Caribbean.

Their diet is mainly based on plankton, although they also regularly feed on schools of small fish and squid. Unlike peregrine sharks, which simply filter vast amounts of water as they swim, whale sharks actively suck their prey before filtering it efficiently and are sometimes seen as a group, feeding on large concentrations of food.

They appear regularly in the same places at specific times of the year, for now they can be found in our beautiful Caribbean until October.

These sharks have become the focal point of the ecotourism industry where divers take the opportunity to swim with these docile giants.

The number of offspring varies: a Taiwanese specimen had about 300, the highest number found in a single shark.

COME AND EXPERIENCE THE WONDERFUL ADVENTURE THAT IS TO SWIM WITH THESE BEAUTIFUL CREATURES!

The post MEETING WITH WHALE SHARK IN THE CARIBBEAN! appeared first on Phantom Divers.