Bull Sharks differ from other species of sharks as they produce lots of testosterone, they are faster and more unpredictable than the Caribbean Reef Shark for example. They are smart creatures that can retain information and after the first time of approaching a feeding they remember it so they are able to repeat this action. Juvenile female bull sharks can be distinguished from an adult by their size and behavior. The adult is way bigger and has no fear to get close to our feeders to get a bite, instead the juveniles are more shy and will probably get close only after seeing an adult set the example. When we have many juveniles they most likely won’t get close to the feeders.

Bull sharks can thrive in both salt and fresh water and can travel far up rivers.

According to their mood, these sharks can change their skin tone to be darker than usual. They have special sensing organs, called electroreceptors “the ampullae of Lorenzini”, forming a network of jelly-filled pores, which allow sharks to orient and feel the electromagnetic waves of an injured fish.

Exactly like people, every shark is different and has a unique personality. They react differently according to their mood and they have preferences regarding the feeder. Different sharks interact in different ways towards different feeder.

Every shark has a name, according to their physical characteristics.

Sharks that visit us are 50% new sharks and the other 50% comes regularly every year. We can recognize sharks because we marked them, with the help of the association Saving Our Sharks. 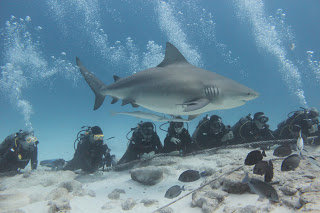 She likes a lot interacting with Ramon and she is very playful with him. Instead, with David, she becomes more nervous and doesn’t like to interact.

The Shark´s behavior  can change according to these factors: their mood, the stress of the feeder, if there current or not, how many people are in the area..

Last season we met a very big female, probably 3 mt with a black spot  on the right side, underneath the dorsal fin and we called her Marilyn.

A shark that visits us every year is ROOSTER. She has a malformation from birth in the tip of the fin, that makes her look like a rooster.

This shark most likely was injured from a propeller and has many cuts on a pectoral fin. It looks like she has three finger, that’s why we called her DEDOS, in Spanish fingers. In one occasion this shark came before the season, she stayed during the season, and after the season, till August. 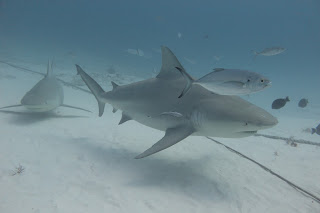 This female adult comes every season and has a specific mark on her right side gills. She has a malformation from birth as the gills are joined together.

To learn more about these amazing creatures you can also take the PADI Shark Observer Certification. So next season, be on the lookout for these girls and try to identify them.