Increasing population of the lionfish in the Caribbean

HomeBlogUncategorizedIncreasing population of the lionfish in the...
Posted 28 November, 2014

Increasing population of the lionfish in the Caribbean

The lionfish, also called scorpion fish, is native to the Indo-Pacific reefs, although it has now spread to warm oceans around the world. The lionfish, was displaced from its natural habitat to occupy the aquariums of America, until an accident left some specimens free, which led to the devastation of the marine life of its new environment: the Caribbean. Its great reproductive capacity, reaches about 30,000 eggs every four days and its food aggressiveness, coupled with the absence of natural predators, poisonous animals, facilitated that this voracious predatory species, was becoming a dangerous threat. Almost all the characteristics of this species, its red and white stripes, its long and striking pectoral fins and its irritable behavior, seem to say Do not touch! 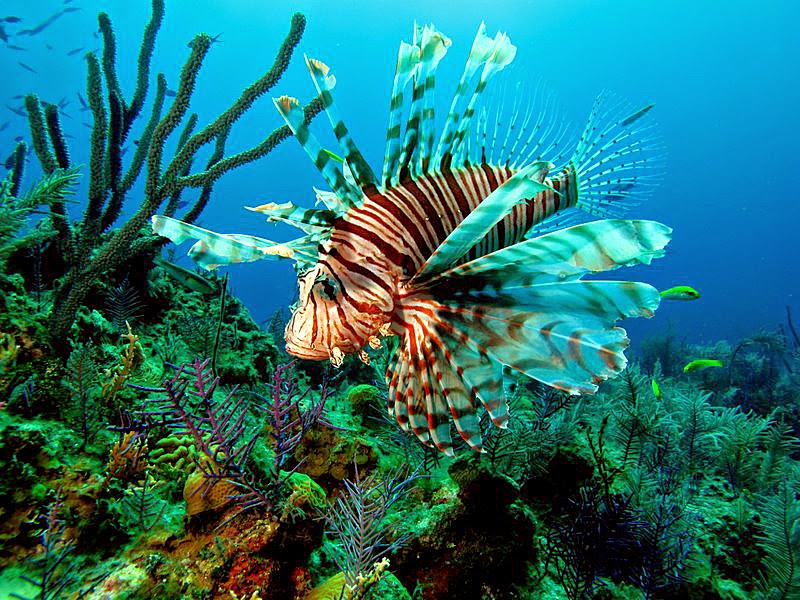 The venom of the lionfish, which expels through its 13 dorsal spines, 2 pelvics and 3 piercing anales, is its defensive tool. This fish hunts its prey, mainly fish and shrimp, molluscs and crustaceans, thanks to its camouflage and its very fast reflexes, but it has a great adaptability to consume new prey and it can expand its stomach up to 30 times its initial volume . The bite of the lionfish is extremely painful for humans and can cause nausea and respiratory problems, but it is usually not fatal, it can be treated with analgesics or hot water, since the poison is a thermolabile protein that unfolds with heat. The lionfish can measure up to 50cm, but the average is closer to 30cm. In some regions of the world, lionfish have a lot of fame as food, but they are especially sought after for pet trade for aquariums. It is an abundant species in the invaded sites and its distribution is increasing. This species is very aggressive in its eating habits, it eats all the larvae, eggs or minnows of more than 40 species. The effect can be devastating, since it unbalances the whole reef ecosystem when a new being as aggressive as this fish is intoxicated. In its natural habitat it usually goes through large periods of fasting, which forces the lionfish to overeat when there is a possibility of feeding. And this is the biggest problem for local species. Among the major problems of this
invasion, is that Caribbean species do not identify it as a predator and do not know how to defend themselves.

After passing through much of the Atlantic and the Caribbean, especially the Mesoamerican reef, the first specimen of this species was observed in Mexico in 2009, on the island of Cozumel, in the southeast of the country, in the state of Quintana Roo. In Mexico there was already prior knowledge of the problems that some Caribbean countries already suffered and as soon as the first sightings of this species were reported, they began to attack it. One of the main proposals to mitigate the negative impacts of this species, is to consume it and market it as a first quality product, since its meat is 100% free of toxin and is full of protein, being a white meat with a mild flavor but very consistent and special. When consuming lionfish, it contributes to the conservation of marine resources and today is a commercial alternative for the local community.

Phantom Divers made a video that shows a simple way to build a container of lionfish. We hope you like it!

The post Increasing population of the lionfish in the Caribbean appeared first on Phantom Divers.