HERE WE GO, WHALE SHARK SEASON IN THE MEXICAN CARIBBEAN!

HomeBlogUncategorizedHERE WE GO, WHALE SHARK SEASON IN THE MEXICAN...
Posted 23 May, 2018

HERE WE GO, WHALE SHARK SEASON IN THE MEXICAN CARIBBEAN!

Finally! We are very happy to announce that on June 1st, Whale Shark season is finally opening the doors, in the warm waters of the Mexican Caribbean.

Mexico is considered the best destination worldwide to snorkel with these peaceful giants.

Swimming with Whale Shark is often at the top of every diver`s bucket list and here’s why. Whale Sharks (Rhincodon Typus) are really amazing creatures. They are the biggest Sharks and the biggest fish in the ocean. The largest Whale shark ever spotted had a length of 12.85 meters and weighted up to 21 t. They love swimming in the tropical warm waters, that`s why it is easy to spot them in our warm waters. It is very uncommon to find them below  21 °C.

Whale Sharks have very large mouths and are filter feeders, which is a feeding mode that occurs in only other two Sharks, the magamouth Shark and the baskin shark. They feed almost exclusively on plankton and are really friendly giants.

The species was distinguished in April 1828 after the harpooning of a 4.6 m (15 ft) specimenin Table Bay, South Africa. Andrew Smith, a military doctor associated with British troops stationed in Cape Town, described it the following year.

The name “whale shark” refers to the fish’s size, being as large as some species of whales, and also to its being a filter feeder like baleen whales.

Whale sharks have a mouth that can be 1.5 m (4.9 ft) wide, containing 300 to 350 rows of tiny teeth and 10 filter pads which it uses to filter feed. Unlike many other sharks, whale sharks’ mouths are located at the front of the head rather than on the underside of the head. They have five large pairs of gills. The head is wide and flat with two small eyes at the front. Whale sharks are grey with a white belly. Their skin is marked with pale yellow – white spots and stripes which are unique to each individual.
The whale shark is the largest non cetaceans animal in the world.
Regarding their reproduction neither mating nor pupping of whale sharks has been observed.
The capture of a female in July 1996 that was pregnant with 300 pups indicated whale sharks are ovoviviparous The eggs remain in the body and the females give birth to live young which are 40 to 60 cm (16 to 24 in) long. Evidence indicates the pups are not all born at once, but rather the female retains sperm from one mating and produces a steady stream of pups over a prolonged period. They reach sexual maturity at around 30 years and their lifespan is an estimated 70 to 100 years. 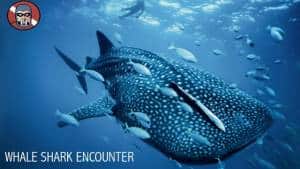 The whale shark inhabits all tropical and warm-temperate seas. The fish is primarily pelagic, living in the open sea but not in the greater depths of the ocean, although it is known to occasionally dive to depths of as much as 1,800 metres (5,900 ft). Seasonal feeding aggregations occur at several coastal sites such as here in Mexico in the waters of Isla Mujeres and Isla Holbox in Yucatan.

There is currently no robust estimate of the global whale shark population. The species is considered endangered by the IUCN, the Intenational Union for Conseravtion of Nature

due to the impacts of fisheries, bycatch losses, and vessel strikes, combined with its long life span and late maturation.

Despite its size, the whale shark does not pose significant danger to humans. Whale sharks are docile fish and sometimes they even allow swimmers to catch a ride. However we do NOT allow to get to touch them as it can disturb the Sharks and their feeding movements.

Don`t miss this unique and amazing opportunity, come and swim with these gentle giants of the sea. Book now for your Whale Shark Encounter  with Phantom Divers!