Get to know the Splendid Toadfish

HomeBlogUncategorizedGet to know the Splendid Toadfish
Posted 24 May, 2013

Get to know the Splendid Toadfish

An entirely endemic species of the island of Cozumel 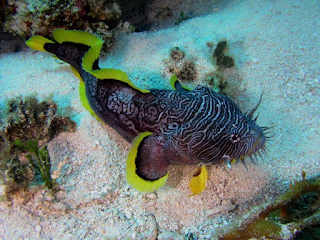 The Splendid Toadfish (Sanopus splendidus) is one of the most interesting peculiarities of the marine life of Cozumel.
It measures 10-15 cm and, like all the other members of the toadfish family, its head is broad, flat and with fleshy barbels, but its distinctive feature is its bright colors: all its eight fins, except the pelvics, are bordered of bright yellow. Its mouth is also yellow, while the head and body are dark, decorated in purple, with black and white stripes. Like all species that live near the sand, the Splendid Toadfish has magnificent eyes placed above the head, and directed upwards (they do not need horizontal vision), and its large jaws are characterized by small, sharp teeth. 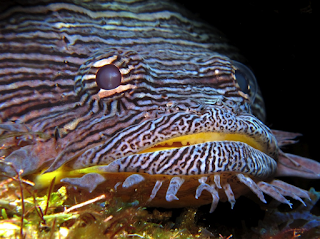 Despite its bright colors, the Splendid Toadfish is a shy creature and is quite difficult to persuade: you usually find it below or around fissures and coral reefs in clean waters, at a depth of approximately 10-25 m. It is during the night that the toadfish goes out to hunt: it feeds on small fish, shellfish and worms, so night dives are a good time to locate it.

The Splendid Toadfish is entirely endemic to the small island of Cozumel, near the coast in the Mexican Yucatan Peninsula, and the best place to look for it is on the outer part of the low reef like Paradise Reef.

However, it is a less widespread species and is classified as Vulnerable (VU) in the IUCN Red List of Threatened Species (https://www.iucnredlist.org/species/19899/16643913).

That means that, although it is not in danger of extinction, it is in danger in the medium term: even the smallest alteration of the environment could significantly affect its population.

Although it is a protected species, today the Splendid Toadfish remains under the threat of uncontrolled urban development related to the tourism industry, however efforts are being made to control the risk.

The post Get to know the Splendid Toadfish appeared first on Phantom Divers.